Asterix in Hindi Book Launch at Residence of France in India 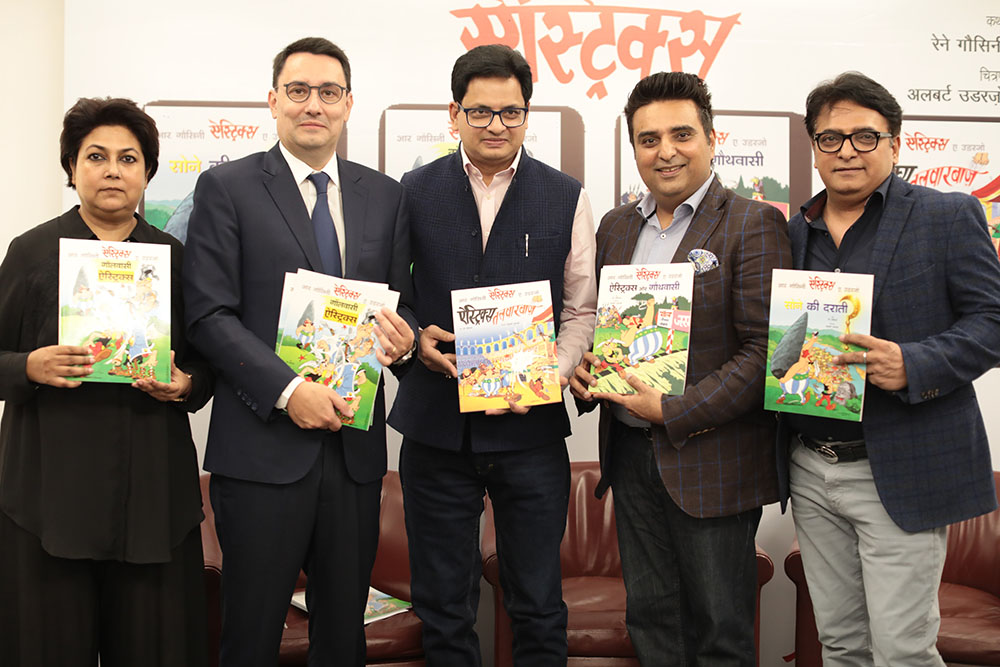 The Ambassador of France to India, H.E. Mr Alexandre Ziegler, and publisher Ajay Mago, released the first four albums of the Astérix comics series in Hindi at the Residence of France.

Present for the occasion, the co-translators, Dipa Chaudhuri and Puneet Gupta, shared their experience of translating the adventures of Astérix, the internationally popular comic series, from French to Hindi.

Welcoming the publication, Ambassador Alexandre Ziegler said, “It’s an immense pleasure to release the first four Asterix albums in Hindi. Asterix’ strength – apart from the superhuman one he acquires through the druid’s magic potion – is his ability to please and renew his audience, generation after generation. The characters embodying French spirit are timeless and such a part of French heritage. Their stories are an opportunity for readers to get a glimpse of the history of the figures’ country of origin. Making the humour and stories accessible in another language and culture is no mean feat, so I warmly congratulate the translators for taking up this challenge.”

Céleste Surugue, Managing Director of Les Éditions Albert René “The Astérix albums have been published in 111 languages and dialects until now, making it the best-selling comic book series worldwide with 375 million copies sold up to date. Astérix is very well-known character in India, very appreciated for all the values the series carries, having this universe available to the millions of Hindi-speaking people was necessary and we were glad to collaborate with Om Books International in order to make this happen. After years of hard work with a very professional team, we are now very pleased to see these first 4 albums of the series available with a very accurate adaptation. We do hope these will have the success they deserve.”

Ajay Mago, Publisher, Om Books International remarked, “I have grown up devouring Astérix comics. In fact, I would wait with bated breath for the subsequent album to be released. And I was amazed at the amount of cultural history that these apparent comics are replete with. Every character has been so carefully crafted. Every dialogue has layers of meanings. It was back then that I had decided that, someday, I would love a Hindi edition of this series. I was in touch with Hachette Livre for over 5 years before they were convinced that we were the right team of professionals to tie up with for the Hindi edition. So I am really delighted that the albums in Hindi are a reality ,

About the Comics - Astérix comics are amongst the most widely read comic series in the world, and have been translated into over 100 languages. The series first appeared in the Franco-Belgian comics magazine, “Pilote”, on 29 October 1959. It was written by René Goscinny and illustrated by Albert Uderzo. The first four albums—Astérix: Gaulwasi Astérix; Astérix: Sone ki Darati; Astérix: Astérix aur Gawthwasi; Astérix: Astérix Talwarbaz— are now available in Hindi.

About the Translators - Dipa Chaudhuri: With an M.Phil. in French Literature from Université Paris Diderot-Paris 7, She has been a publishing professional for nearly two decades. Since 2010, she has been Chief Editor, Om Books International, and looks after the fiction and non-fiction publishing lists.

Puneet Gupta: An advertising professional and a producer of audio visuals, Puneet Gupta writes science fiction novels, short stories and humorous poetry in Hindi. A die-hard comics enthusiast since childhood, he has also translated the comic series, Tintin, in Hindi.

OBI has an equally strong and varied children’s publishing programme under its imprint, OmKidz.