Launch of CNG-fueled Two–Wheelers in Mumbai 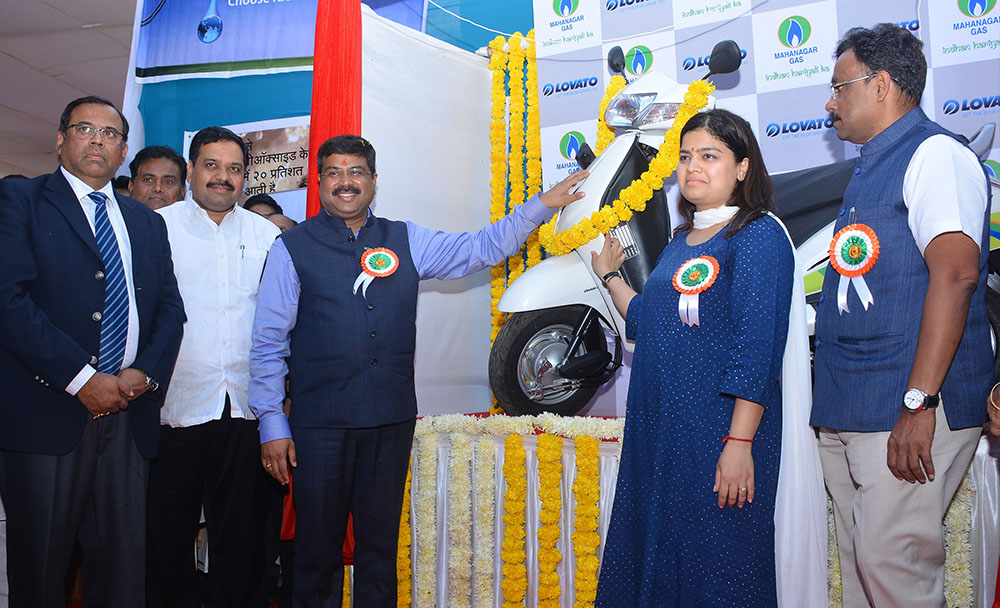 Continuing in its endeavor to protect the environment through its eco-friendly fuel, Mahanagar Gas Limited (MGL) in association with M/s Eco Fuel (Indian Partners of Lovato, Italy) launched CNG fueled two-wheelers thus enabling them to run on safe and economical fuel, further contributing to a pollution free environment.

The launch was done by the Honourable Union Minister of State (Independent Charge) for Petroleum and Natural Gas Shri. Dharmendra Pradhan in Mumbai, and was presided over by Shri. Vinod Tawde, Honourable Minister for Education, Youth, Sports & Cultural Affairs and Guardian Minister of Mumbai Suburban, Govt. of Maharashtra. Shri. Dharmendra Pradhan also launched e-wallet payments which can be used at the time of filling CNG, thus supporting and working towards the objective of making India a cashless economy.

Speaking at the occasion, Shri Dharmendra Pradhan said that the launch of CNG fueled two wheelers will give an opportunity to more than 36 lakhs two wheelers running in the Mumbai Metropolitan Region (MMR) to opt for this eco-friendly fuel. In the last few years CNG powered vehicles have grown in Mumbai Metropolitan Region at a CAGR of over 70% given the fuel economics and eco-friendly nature of CNG.

The CNG kit for two wheelers comprises of two CNG cylinders of 1.2 kg each, which can run up to 120 to 130 km per kg at an approximate cost of INR 0.60 per km per single fill and is expected to be substantially economical as compared to a similar petrol run vehicle at the current level of prices as per the kit manufacturer. In the initial phase, the scooters shall be retrofitted with a CNG kit manufactured by Lovato.

Presently two kit manufacturers namely M/s ITUK & M/s Lovato have got two-wheeler CNG kits approved by ARAI, Pune and ICAT Gurgaon respectively. Lovato has got approval for 18 Scooter models of various OEMs present in the market. Considering the huge potential of this segment other kit manufacturers are also planning to launch their two-wheeler kits.